Frozen shoulder – what a pain! 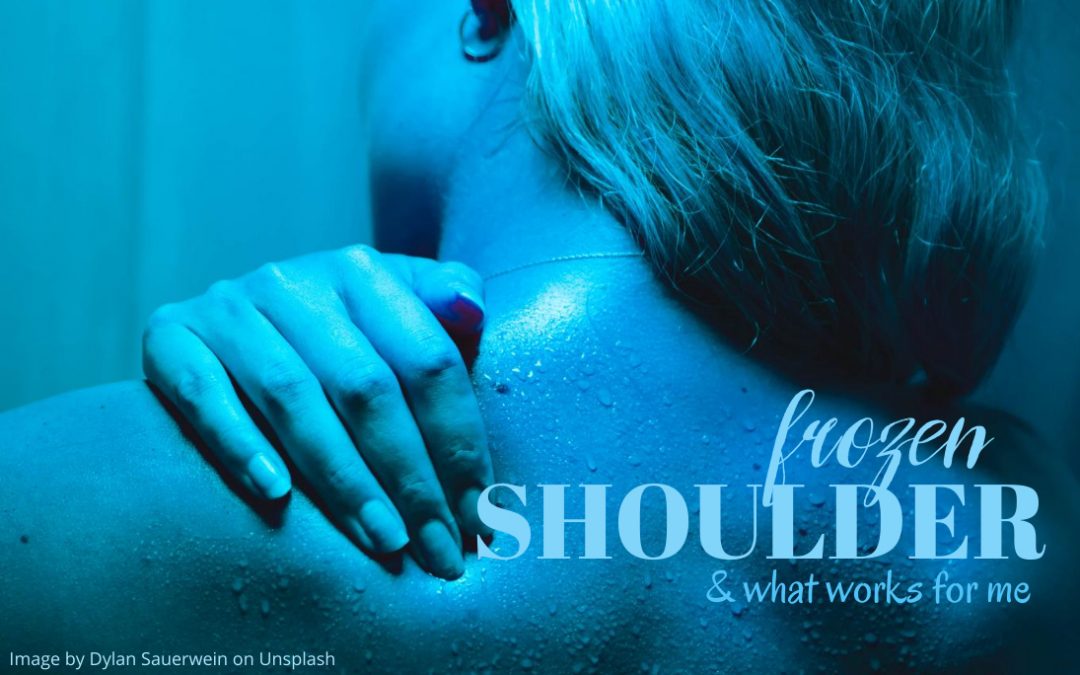 It started as a cold feeling in my arm. It felt like I was sitting in a draft, but there was no open window or door, no cold air coming into the room.

Shortly after, I noticed my arm felt really heavy. I was worried that I’d had a heart attack, but when I Googled that, it turned out that pain from a heart attack would be felt in the left arm, and this was in my right. It was a weird feeling. A feeling like if I could just rest my arm on a pile of cushions it would feel better. When I was working, I felt like I needed to stop typing and let my arm hang at my side to get some relief from the heavy feeling. Resting my elbow on the credenza of my desk helped somewhat. Painkillers had no effect. I already take a number of meds for reducing different types of pain and inflammation, and I have prescriptions for Tramadol and Flexeril to take as needed. Nothing was relieving this pain.

When I started not being able to reach up, or behind my back, I recognized the symptoms from 2017 when I spent a month in intensive daily physical therapy. Frozen shoulder. It’s a strange pain. It’s called frozen shoulder, but the pain for me, anyway, shows up in your bicep. And it can also show up after you’ve completed a movement. Say, for instance, you have a small SUV with a non-automatic hatchback. You lift the rear hatch to take out your groceries, and you can reach up to close it if you stand on your tiptoes, but it’s after you’ve closed the rear door that the pain starts. And your bicep burns. It burns so badly that you sink to the floor clutching your arm with a scowl on your face that says “if you know what’s good for you, you won’t come near me until I’m able to stand up straight and breathe normally.”

I’ve had appointments with both my rheumatologist and neurologist since the symptoms started. My rheumatologist is sympathetic to my time constraints and gave me a printout of physical therapy exercises. I can’t do most of them because the range of motion is too advanced for the range I currently have. I still have the printouts from 2017 (who says being a packrat is a bad thing?) and many of the exercises are firmly planted in my brain. I distinctly remember having to do range-of-motion exercises, like “snow angels” against the wall, and running a cloth up and down the wall with my affected arm, among other tortuous activities.

What causes frozen shoulder, and what are the symptoms?

Frozen shoulder, or adhesive capsulitis, is where the shoulder joint becomes stiff and painful, limiting arm movement. This condition often develops gradually over the course of several years.

There are many different causes for frozen shoulder, including arthritis, injuries to the bursa or rotator cuff muscle, repetitive tasks that cause inflammation in the shoulder joint, or movement of muscles that are not usually used a lot.

The most common cause is related to aging. The lack of use over time causes a decrease in blood flow to the area where muscles become tight and eventually freeze up.

I understand the symptoms, but what does frozen shoulder really feel like?

I find it hard to do anything that requires the proverbial “elbow grease”. The strength just isn’t there.

Opening jars and bottles is harder than usual.

When I get up in the morning, it hurts to lean on my right arm to get myself up to a sitting position to get out of bed.

I cannot reach. I never imagined I’d need a gadget to help me wipe my butt.

I can’t lift my arm enough to brush my hair. I have to brush it poorly with my left hand or bring my head down to meet the brush.

The slow burn in my bicep is constant. There’s not a moment that I’m not aware that I have a frozen shoulder.

I can raise my arm about 45 degrees from my body before the pain gets worse.

How long does it take for a frozen shoulder to heal?

Frozen shoulder is not a quick thing to get rid of! If you research this, you’ll find it can take up to 3 years to get rid of. There are 3 stages.

This stage begins when you first notice that your shoulder is painful and stiff. You might have trouble sleeping because of the pain. Your shoulder feels like it’s “frozen” and won’t move. The freezing stage typically lasts from 6 weeks to 9 months.

The pain may improve during the frozen stage, which lasts 4 to 6 months. The stiffness may still make daily activities difficult.

The thawing stage is when your range of motion starts to return to normal. This can take up to 2 years.

Can I speed up the healing process?

I found some ways you can speed up the healing process. My research suggests you can try topical pain relievers like arnica gel, capsicum gel, or mentholated ointments, which reduce inflammation. This should help with pain relief and will increase blood circulation to your shoulder joint. These topical things have not worked for me but may work for you. Calming the symptoms is temporary. I’m looking for something to make it go away!

My perspective: what works for me

Showers are amazing. I could just stand under the hot water until it runs out. The heat and steam seem to help.

A long time ago, I felted a wool sweater, cut off the arm, sewed up the ends, stuffed it with rice, and made a heat pack! I still love using it to this day. I put it in the microwave for 2 minutes, and it holds the heat beautifully. I drape it over my shoulder, and it does help to ease the pain somewhat.

When I was going to physical therapy the first time, they always sent me home with an ice pack. I still have some of those big ice packs in the freezer, so I swap ice and heat, which seems to be good therapy for frozen shoulder.

This morning I dug out my Trigger Therapy Workbook and looked up frozen shoulder. I found a great trigger spot – three, actually! – on the back of my shoulder blade that I can reach with my Backnobber and boy does it feel good! If you’ve never tried trigger point therapy, it’s pretty awesome! I’ll write a post on that another time.

As far as physical therapy, some stretching exercises seem to help.

With all these exercises, I have to remember that it takes a while for the muscles in my arm to register the stretch (remember the tail gate story above?) Your frozen shoulder story may be different!

Warm up with this exercise:

Ease into this one. Having your affected arm behind your back hurts!

This next exercise always had me joking with the physical therapist that they only had me there to clean the walls.

Sit or stand for the next one.

You’ll need to find a shelf or bookcase that is the right height for this one.

I hope these tips help you. I really needed to document them to remind myself to do these exercises so I can get rid of my own frozen shoulder! I’ve read that it’s not common to get it in the same shoulder twice – that is not my experience!

Photo by Dylan Sauerwein from Unsplash